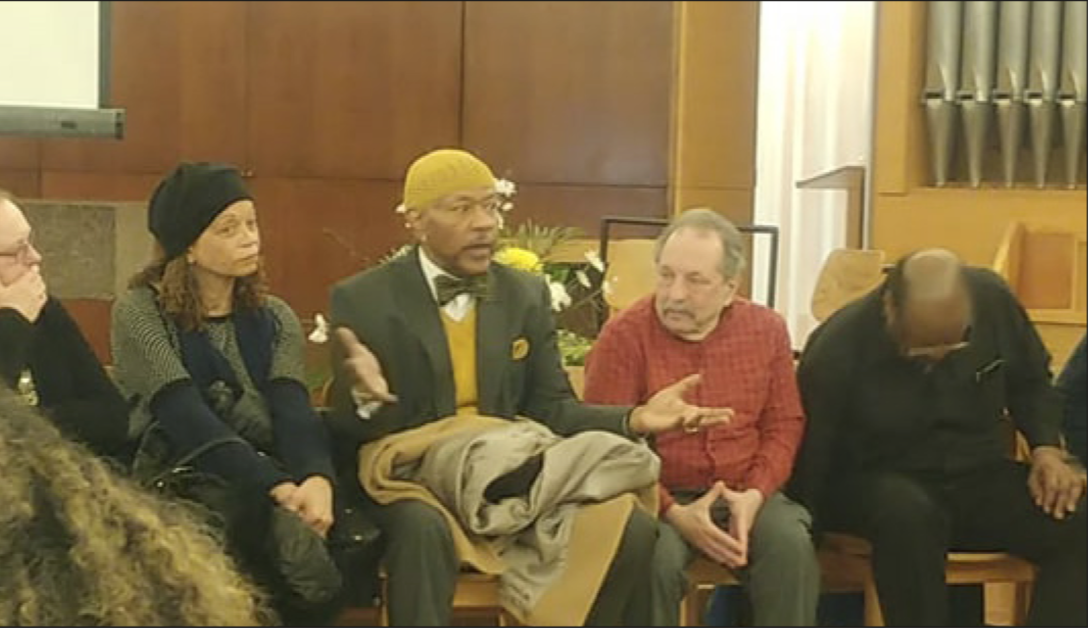 Over 80 members of Temple Beth Emeth synagogue and Bethel African Methodist Episcopal Church in Ann Arbor, Michigan came together on Saturday, January 18 at Temple Beth Emeth on Packard Road to watch and discuss the film Suppressed: The Fight to Vote. The new documentary by Robert Greenwald focuses on voter suppression in Georgia leading up to and on the day of the 2018 midterm election.

Less than four miles stand between the two community congregations which were founded 52 and 163 years ago. However, it was not until this historic event that the two groups came together. The collaboration was born of a friendship that began last year between Rabbi Josh Whinston and Pastor Mashod A. Evans, Sr. The two have a lot in common. Both leaders came to Ann Arbor in a leadership role for their respective congregations within the last four years. Both have young families. Both have a propensity towards community involvement and social justice. Last year, Whinston and others from TBE, along with a Christian congregation, took a trek to the Texas border to stand in solidarity with our neighbors seeking asylum. In 2018, Evans led his congregation on an inaugural mission trip to Belize to help with a school, community health education, and prison ministry. The film served different purposes for each congregation. For Temple Beth Emeth, the film screening and discussion was a chance to take a deeper dive into racial issues in this country before embarking on a four-day civil rights jour-ney in Georgia and Alabama this Spring. Fifty TBE members are signed up for the journey and will visit the Equal Justice Initiative’s Legacy Museum & Lynching Memorial, go on a few historic walking tours, and meet with Fair Fight 2020 team in Georgia. “I didn’t want us to go as tourists,” said Whinston.

For Evans, the screening served other purposes: to simply inform, and also as part of a 10-week transformative teaching Bethel recently completed, based on the book 5 Practices of Fruitful Congregations. In this book, Robert Schnase outlines five practices for today’s church to achieve excellence and stretch the congregation. One of these practices is ‘Risk Taking Mission and Service,’ which includes stretching compassion outward beyond the walls of the church. In Suppressed’s 45 minutes, attendees were given a glimpse of what the new face of voter suppression looks like. Isolated stories from across the state of Georgia were woven together to form a much bigger story of voter suppression. No one in the room was prepared for the impact this short film would have on reimagining the lengths people would go to prevent a fair election.

Voter suppression in Georgia started long before the historic 2018 midterm election and was fraught with long lines, uncounted provisional ballots and misinformation. Since 2013, 890,000 Georgian voters have been purged for reasons such as moving, not returning a postcard, not voting in a few elections, and name discrepancies. Lewis Brooks, an 89-year-old African American veteran, was discouraged when he received notice that his polling place would be closed due to lack of funding, posing a 3.5 mile hike for him. It was not until Bobby Jenkins, a retired educator, stepped in that residents learned seven of the nine precincts in Randolph County (which is 62% African American) were scheduled for closure. The public outcry stopped the closure and drew attention to a larger issue: 212 polling locations have been closed across the state since 2012.

Peggy Xu, a 23-year-old speechwriter who left for Washington, D.C. to work on a temporary assignment, sent in her application for an absentee ballot, with her new D.C. address, in October. She sent emails and called the registrar and voter protection hotline as the election drew near. Ultimately, she was unable to vote in the election. She likened the experience to “a punch to the gut.” Xu reached out online to her Facebook community to see if there were others who could identify with her situation. Turns out there were 40 similar stories within her Facebook friend-set that began inboxing her with their own stories of being left out of the election. After an investigation, it was found that “tens of thousands” of voters did not receive their requested absentee ballot in time to vote. Feelings of helplessness, isolation, non-importance and exclusion were communicated throughout the film. The individual stories were accompanied with statistics and commentary from people who served on the front lines of voting justice before and on the day of the election. In the film, Congresswoman Marcia Fudge said ”This is systematic. If you look at what has happened across this country in the last five years, forty states have passed some kind of law to make it more difficult for people to vote.”

During the post-film discussion, the congregations were mixed up and split into two discussion circles led by each of the worship leaders. Attendees shared their gut reactions to the film, new realizations, and personal stories of their own. The consensus among both groups was that voting is just one symptom of other issues. “This is just the tip of the iceberg,” said TBE member, Alan Cotzin. William Hampton, President of the Ann Arbor Branch of the NAACP, encouraged everyone to look inside our own communities as well. A woman from TBE begged the question “Why is there such a big discrepancy between Washtenaw and Wayne counties? What can we do about that?”

Yodit Mesfin-Johnson, President and CEO of Nonprofit Enterprise at Work (NEW), recounted how she felt the day after the 2016 presidential election. “My parents were civil rights activists, and I have lived and served in this community for 25 years. But, as my son and I were in the car looking around the next day, for the first time in my life I feared for the safety of our personhood.” Claire Weiner of TBE reflected, “The word purging is really powerful. The word purging has a big meaning not only for African Americans but also for Jews. Each time I heard that in the film I thought of elimination.” Bethel member Lisa Cook served as the Social Media Manager for Stacey Abrams’ run for Georgia Governor in 2018. Cook shared additional insight on the election-day chaos during the discussion, “I was there. We had to go through metal detectors. We were sending pizza to people standing in line. Eight hundred voting machines were left in a warehouse. The lines were completely unnecessary.”

Attendees were all invited to stay for Havdalah, followed by a light repast. Many attendees commented that there ought to be more collaborative events such as this one. Connections, friendships, and alliances have always played a pivotal role in the realm of social justice, similar to the unlikely friendship between Rabbi Whinston and Rev. Evans and their congregations. The fact that the Rev. Dr. Martin Luther King, Jr. suffered from loneliness, the effects of racism, and depression most of his life is often neglected. He nearly lost his life as a young child in a suicide attempt. His autopsy revealed that, though only 39 years old, King “had the heart of a 60 year old.” Many of his speeches and sermons called for brotherhood and friendship. Hopefully, this film screening and discussion will spark new ideas for collaboration between these two congregations, in this community, and beyond. In the words of the late Rev. Dr. Martin Luther King, Jr. “We cannot walk alone.”

Leslie discovered the power of the pen in the third grade after her family moved to a new school district. Writing became a way to sort out her new surroundings and escape to fantasy landscapes. That child, and voice, has matured into a poet, writer, blogger, journalist, online content creator and editor. Leslie is a social entrepreneur with a demonstrated commitment to community. She is an active community member in Washtenaw County (Michigan) with expertise in social media marketing and content management systems, volunteer coordination and writing and 13 years of experience in the areas of online community management, training, leadership development, and social networking. She is interested in facilitating connection with both community residents and businesses. Through this work, the economy of the community is improved and the organizations are financially successful. Her main mode of advocacy and online community, however, is through writing.

Hanging Out with Teacher Patti

A Tribute to the Phenomenon of the Mundane

The Tru Story of Success

Your Health Is Your Wealth

A Space for Writers of the World

Writing, Teaching and Tearing Down the House with a Toddler